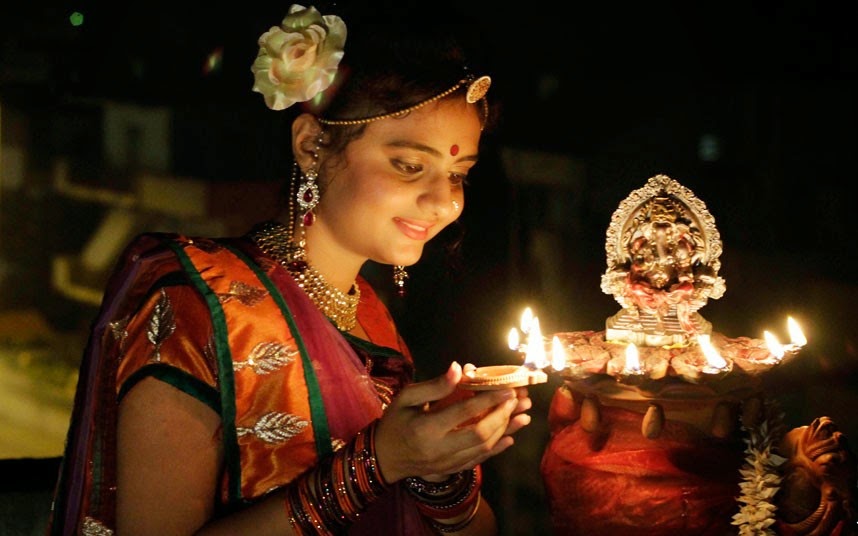 Karwa Chauth is one of the most popular festival specially for married women.It is celebrated in different ways depending on the region where a person lives. Though the festival is much popular in Northern and Western Indian states.It is the most important and difficult fast observed by married Hindu women. (Unmarried women, widows, and spinsters are barred from observing this fast.) Shiva, Parvati and their son Kartikeya are worshiped on this day along with the 10 'karwas' (earthen pots) filled with sweets.


It is uncertain to determine how festivals have originated but yes there are some hypothetical stories behind this.It has been started from Military persons ,as they usually stay away from home,also around the time of the festival, so women started to keep fast to pray for their safety.


There is another story about the origin of this festival. Earlier, girls were married at teenagers,it is very difficult to go and live with in-laws in very remote village.If she had any problem with them,here were no one with whom she can share her problems.Telephones,buses and trains were not heard of in those days.Once the girl left her parent's home for in-laws, she might not be back before long.


Thus the custom started that, at the time of marriage, she would be accompanied with another girl of her same age,treated as a god-sisters or god-friends.Their friendship was  sanctified through a small Hindu ceremony during the marriage and that girl was also married into the same village.They would treat each other like real sisters. During any issues later in life, involving even the husband or in-laws, these women would be able to confidently talk or seek help from each other. Thus Karva Chauth started as a festival to celebrate this special bond of friendship between the brides and their god-friends .


The notion of praying and fasting for the husband came much later,but husbands would always be associated with this festival, because the day of starting this friendship between two god-sisters was essentially the day of bride's marriage to him.

There are legends associated with the Karva Chauth festival. In some tellings, the tales are interlinked, with one acting as a frame story for another.

The Story of Queen Veervati
A beautiful queen called Veervati was the only sister of seven brothers. She spent her first Karva Chauth at her parents' house. She kept a strict fast after sunrise but, by evening, was desperately waiting for the moonrise due to severe thirst and hunger. Her seven brothers couldn't see her sister in such distress and created a mirror in a pipal tree that made it look as though the moon had risen. The sister mistook it for the moon and broke her fast. The moment she ate, the king,died.Heartbroken, she wept through out the night until her shakti compelled a Goddess to appear and ask why she cried. When the queen explained her distress, the Goddess revealed that she had been cheated by her brothers and instructed her to repeat the Karva Chauth fast with complete devotion. When Veervati repeated the fast, Yama was forced to restore her husband to life.

The Legend of Karva
A woman named Karva was deeply devoted to his husband and due to her intense love and dedication towards him,she had spiritual powers.While bathing at a river, her husband was caught by a crocodile.Then she requested Yama (the god of death) to send the crocodile to hell and send her husband again,but he refused to do so.Then she threatened to curse Yama and destroy him. Yama, afraid of being cursed by Pati-vrat (devoted) wife, sent the crocodile to hell and blessed Karva's husband with long life. Karva and her husband enjoyed many years of wedded bliss together. To this day, Karva Chauth is celebrated with great faith and belief.

The Story of Satyavan and Savitri
When Lord Yama came to procure Satyavan's soul, Savitri begged him to grant him life.But he refused, then she stopped eating and drinking.On seeing her devotion for his husband,Yama said that she could ask for any other boon except for the life of her husband then Savitri tricked him and asked, to bless her with childrens. Yama agreed. Being a "'Pati-Vrat (devoted) wife, Savitri would never let any other man be the father of her children. Yama was left with no other choice but to restore Savitri's husband to life.

These were the stories associated with this fast but the important aspect of Karwa Chauth is that a dawn to dusk fast is undertaken by the ladies and they finally break the fast after seeing the moon.The fast is unique in itself because nowhere in this whole world does a wife go without food or water just to pray for the long-life and well-being of her husband.

This festival comes 9 days before Diwali on 'kartik ki chauth'.The term 'Chauth' means the 'fourth day' and 'Karwa' is an earthen pot with a spout - a symbol of peace and prosperity - that is necessary for the rituals. Hence the name 'Karwa Chauth

On this auspicious occasion, two most popular gifts that are certain to be gifted to the ladies who observes the fast are 'Sargi' and 'Baya'. Sargi is basically the gift of scrumptious meals, sweets and clothes presented to the woman on the occasion of the Karva Chauth day which is to be consumed early in morning on Karwa Chauth while Baya or Bayana  includes gifts for the mother-in-law, which is ideally a sari.

In principle, elderly woman in the house is supposed to narrate the story of Karwa Chauth before the fast is terminated.The women who observe this festival are called “Saubhagyavati” meaning “joyous and happy status of wifehood.”For a newly wed couple, the festival is celebrated with immense pomp and enthusiasm.

Women dress up in special clothes during this festival. A pink or red sari with a gold woven pattern is worn by many women in the evening. New brides will wear their wedding costumes.All deck up in jewelry and wear 'mehendi' or henna patterns especially on the hands. Decorative 'bindis' on the forehead are a must for all women. Fasting women from all over the neighborhood gather in a group and narrate mythological stories.

But now a days this festival has  become a fashion symbol in modern era. Special eateries for the day of Karwa Chauth are prepared.Most restaurants have special menus.Different clubs organize many special events on this festival with various bumper tambola, stalls and even a dance competition. With so much feasting and fun added to it, fasting had never been so good before.

All husbands reward their wives with a wonderful present for observing such a difficult fast for your well being, happiness and long life.One can choose from a variety of gifts that is a token of love that they both share. So, you should send her the most beautiful and precious gift on the occasion of Karwa Chauth.
The fast of Karwa Chawth truly sets the merry tone of the fun and frolic, festivity and feasting that come in good measure during Diwali — the biggest festival of the Hindus.